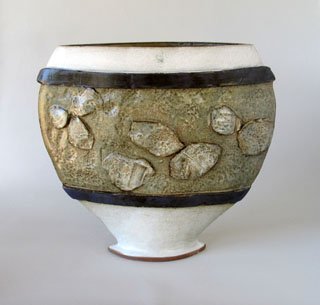 I received my formal education in England. After secondary school I attended Portsmouth College of Art and earned a National Diploma of Design in Painting and Wood Engraving. The following year I earned qualifications that allowed me to teach at the secondary school level.

My wife and I came to Canada in 1965 and after a year teaching in Kimberly moved to Crescent Beach where we raised our family. My main occupation for thirty six years was teaching art at secondary schools in England and then BC interspersed with two exchange years in Australia.

In 1972 I built a small pottery studio in our garden for my wife who had become very interested in working with clay. Having such resources readily available, it was a natural progression for me to start using them too. I first exhibited in a group show with the Delta Arts Council soon after it was formed in the late sixties. I have continued to exhibit from time to time in group shows: both with the Delta and White Rock Arts Councils.

our members
become a member
7
×