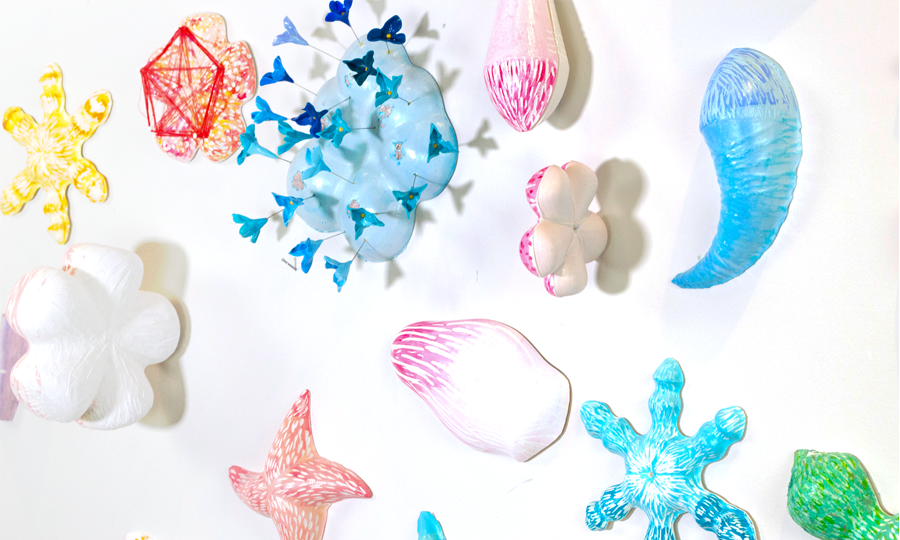 People who physically make objects understand that the making is only one aspect of creating culture: we need admirers and friends who are knowledgeable and thoughtful in their reception of our work, and who champion its grand diversity. This award is specifically for someone who is not a craftsperson, but without whom the craft community would be sorely diminished.

The first Honorary Citizen of Craft Award went to Sheryl MacKay for her enthusiastic, long-term support for the craftspeople of this province. By celebrating their work, Sheryl invites a broader audience to understand the skill, intelligence, and heart of our community – much broader than we could ever cultivate ourselves. The Craft Council of British Columbia is devoted to gaining recognition for this vibrant territory within the arts sector and we are deeply grateful for Sheryl’s ongoing appreciation.

Please note that there is an application fee for this award – $30USD – as this allows us to use Slideroom to engage master jurors from around the province to view, assess and discuss each submission. 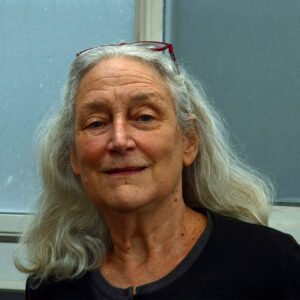 Citizen of Craft 2022 Awardee Amy Gogarty is a highly regarded writer, moderator, speaker, and curator, who is known nationally and internationally. While maintaining an active art practice, she is a dedicated volunteer who contributes to the craft community in British Columbia.

During her career in Canada, Amy has been a tireless, informed author, raising the intellectual conversation around the ceramic arts.

During her career in Canada, Amy has been a tireless, informed author, raising the intellectual conversation around the ceramic arts. Amy was editor (with Ruth Chambers and Mireille Perron) of Utopic Impulses: Contemporary Ceramics Practice, a contemporary anthology of socially responsible ceramics practice, and, along with Nisse Gustafson, of the third volume of Paula Gustafson’s important series, Craft Perception and Practice. She has consulted for many other publications, conferences and exhibitions. Applying intellectual rigour is an essential activity; raising awareness around the endeavours and accomplishments of craft artists. Writing, intellectual discourse, and historic knowledge all elevate the perception and status of craft, educating curators, galleries and museums still unfamiliar with craft practices. As a reflection of the respect with which Amy is held, through-out North America and abroad, in 2021 she was named an Honorary Member for NCECA, an American ceramics organization that captures global attention. 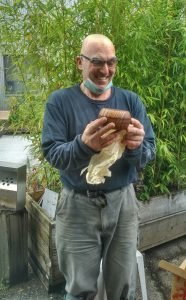 Citizen of Craft 2021 Awardee Morley Faber is a rare bird indeed: a landlord who has a heart. In a city with astronomical real estate values and with a dearth of affordable studio spaces, he owns and manages Mergatroid Studios in East Vancouver with an emphasis on affordability, safety and community. The hallways are clean and uncluttered, the electrical up to code, the sprinkler system maintained. But over and above the basics, Morley has paid attention to many details that make the studios and building function well for each individual.

There is a loading bay and conveyor belt for large and heavy work. He has purchased lights with stands for tenants to borrow should they want to photograph their work. He has provided two scales tenants may use to calculate shipping costs. There are bike racks with a roof to keep bikes out of the rain. He has installed a small
patio with bamboo and other plantings for lunch outdoors. During non-Covid times, he orchestrates community events. All these details combine to make Mergatroid a pleasant and productive place to work. 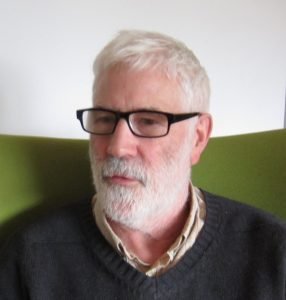 Citizen of Craft 2020 Awardee Allen Collier is a collector, researcher, maker and curator specializing in Canadian craft and design (1940-1980). Over the last 35 years, he has curated, contributed essays and lent objects from his collection to numerous exhibitions on modern craft and design in museums and galleries across the country. Designing and making furniture since 1978, he has often been influenced directly by modernist designers whose work he has collected and exhibited, thereby supporting the notion that the past informs the present. 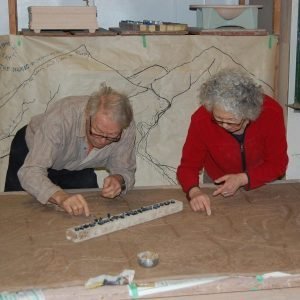 Celia Rice-Jones had initial Art School training in England with Arthur Griffiths and David Leach, within the Leach, Cardew, Davis traditions. She is primarily interested in vessels for everyday use and tries to retain evidence of the clay’s plasticity throughout the process, including the use of slips and always wanting to go beyond the thrown form. Time away from the wheel allows for explorations into more figurative work both modeling and working with slabs.

Keith Rice-Jones trained as a woodwork teacher in England, where he was influenced by the Arts and Crafts tradition, the Bauhaus and modernist ideas. He discovered clay in the early 1970s and continues to maintain an active studio practice. He has exhibited in Australia, Japan, and Canada, including a major retrospective at the Evergreen Cultural Centre in 2013.

In 2018, Celia and Keith Rice-Jones, were nominated successfully by the NWCF for the Hilda Gerson Award, a prize initiated by the Craft Council of BC and awarded biannually to a craftsperson who has demonstrated excellence, innovation and leadership in the BC craft community. 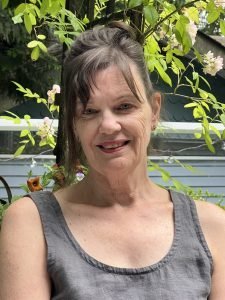 Barbara Duncan’s most recent full-time professional position was Curator, The ACT Art Gallery, Maple Ridge where, during the ten years of her tenure (2010-2020), she sought to instill in the visiting public a greater appreciation for fine craft across a wide range of mediums. During this time, with the support of a part-time assistant and an outstanding crew of volunteers, she also oversaw the operation of a gallery shop where home goods and craft objects of quality standards were made available for sale in support of the gallery and the contributing artists.

Barbara holds a BA in Communications (SFU) and a Master of Arts (The City University, London, England). The latter accreditation, which included a written thesis on the history of the training of artists in the UK, was obtained during a fruitful nine years in London, England. At this time Barbara’s career focus quickly shifted from broadcasting to the visual arts when a brief assignment at the acclaimed Slade School of Fine Arts evolved into a five-year appointment working in an administrative capacity with the student artists and their tutors. After obtaining her Masters degree, Barbara moved on to the Tate Gallery, Millbank (since renamed Tate Britain) where she held the position of Deputy Director’s Assistant for three years.