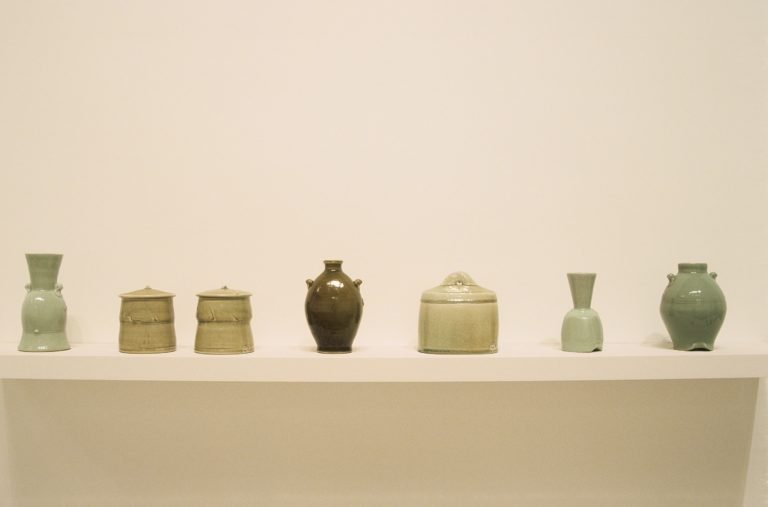 Archival summer student Tatiana Povoroznyuk reflects on the historic relationship between 60s and 70s counterculture and ceramics in BC, asking why these histories should be preserved and what a “pot that transforms” means in 2021.

Working this summer to help re-vitalize the The BC Ceramic Marks Registry project has fully immersed me in marks and artist profiles from decades past. Speaking to ceramicists in Vancouver it’s clear that documenting this history is deeply important to anybody involved in the pottery world. As a relative outsider, I found myself increasingly curious about the history and figures that made up the lively BC ceramic scene. After digging through CCBC’s library, I found myself particularly drawn to the connection between handmade pottery and counterculture in the 1960s and 70s. An idealistic attitude existed during this time, as described by Glenn Allison; “They believed a good straightforward pot could change the world, that it had the power to transform”[1]. What does it mean for a pot to transform, and are there certain lessons we can carry into the present—a time similarly characterized by social unrest, environmental action, and cultural upheaval?

Nora E Vaillant writes that it is impossible to overlook the connection between the way pottery rose in popularity between the 1950s-70s, and the development of counterculture globally.[2] During this time, handmade objects seemed like a rejection of the establishment and consumer-driven economic climate that was so dominant in North America. Creating things by hand represented a societal shift away from previous generations. This desire to distance oneself away from consumerism led to an embrace of back-to-the-land sensibilities, making the embrace to pottery natural; a utilitarian art form that comes from the earth. Paul Mathieu interprets the work of BC potters in the 70s as follows; “Driving the making of these pots—these simple, unassuming, ordinary, humble yet beautiful and robust brown pots, made by hand, one by one—was their makers’ utopian lifestyle”[3]. Here Mathieu is referring to the work of artists exhibited in 2004 exhibition Thrown which highlighted the work of west coast potters John Reeve, Glenn Lewis, Mick Henry, and Ian Steele, all students of Bernard Leach. The exhibit also featured Tam Irving, Charmain Johnson, and Wayne Ngan, all associated with the original four.[4] Indeed, creating pottery at the time was to both participate in an ancient tradition and return to the earthly handmade, but it was also in search of a new utopia; stemming from tradition but engaging with pottery with radical new techniques of high temperature firing in hand-built kilns, every pot represented the zeal of the era.

These utopic ideas towards the pot are certainly enticing, and greatly contributed to the rise of pottery and craft in general in the 70s. Craft organizations like Craft Council were founded across the country, co-operative studios and galleries dotted Vancouver’s West 4th Avenue, and the craft seemed more accessible than ever. However is seems that in the 80s and 90s something shifted. Writing from the perspective of the early 2000s, Matieu claims that the utopic ideals of the early West Coast potters “failed” in a sense; the revolution they believed they were building fell though, their pots never reaching the utopic potential that was imagined. Instead “the world simply continued its march without paying much attention other than simply to turn these kinds of products into (cheap) commodities”.[5] We can trace this shift in North American culture too; the political stamping out of progressive ideologies, and return of a culture of mass consumption. Writing from 2004 this makes sense, but what about now? Has the utopic ideal of studio ceramics completely fallen out of favor?

I would argue no. Although there seems to be less of the kind of haptic energy that’s been documented in Vancouver during the countercultural era, I can’t say that ceramics have just fallen into irrelevance and transformed into just another cheap commodity. Peering into the world of studio ceramics in BC as an outsider, the makers working today are incredibly passionate about their work and the potentials of the art form. Interacting with and handling ceramics continues to bring about notions of a connection to the earth and a direct conduit to the maker’s hand; these objects have a certain energy that can be felt and this does not fade with time. As for the context makers today work in; our present moment is full of social unrest and a need for change. Faced with a climate in crisis and yearning for social justice, people are once again searching for a better world and dreaming of a radically transformed future.

I’m not trying to make the claim that ceramics are the answer to any of the monumental issues my generation is up against, but I would not be surprised if a resurgence in handmade ceramics was afoot. Although we are now up against abysmal support for the arts and are increasingly being squeezed out of cities like Vancouver, young people are channeling their distaste into activism, and naturally, into art. I would encourage those reading to keep an eye on the emerging artists of today, particularly to those that may be throwing around some clay.