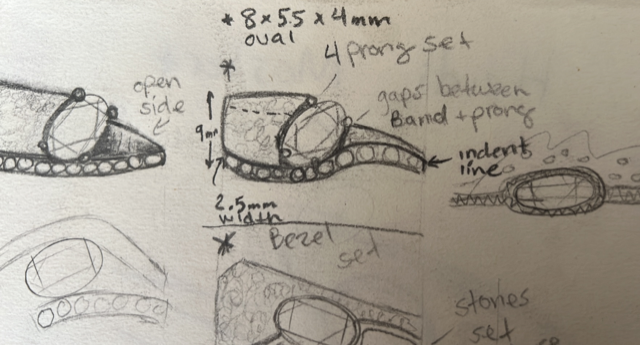 review of the drawn and crafted object
curated by jenny judge

This small in scale, but large in scope exhibition brings many aspects of creativity together.

The objective of the show is to reveal the routinely hidden properties of art and craft making and to expose the role of visual thinking via drawing. Jenny’s curatorship reflects her own creative practice, which doesn’t separate the final product from the initial idea. For Jenny, drawing is a method of revealing what otherwise cannot be foreseen, a path to follow and support creative inquiry. She selected four different creators, asking each of them to uncover the use and application of drawing in their distinctive practices.

Haptic Drawing
Marney McDiarmid translates ideas directly into objects, without making a distinction between the drawing process and the finished product. This strategy may bring to mind ancient pursuits to unify ideas with matter, better known as alchemy. Marney’s ceramics keep drawing visible, preserving and presenting the process as the end result. Delicate and childlike lines convey the sense of innocence and fragility, which unexpectedly emerge as floral-like forms. These intricate objects consequentially produce a mix of sensations, attracting our gaze and at the same time forbidding touch, due to the gentleness and fragility of the material. The viewer remains suspended in between visual and tactile sensations, oscillating in between desire and experience.

Weaved Drawing
Bettina Matzkhun combines drawing with a variety of origins, interests and media, in search of patterns that reverberate throughout natural environment. Her drawings resonate with the analytical curiosity of the scientist and the playful naivety of a child, informing and forming her work at every level and stage of production. Matzkhun employs drawing using various formats and media, including mapping, weaving, pattern-making, embroidery and drawing directly on diverse surfaces. Drawing exists as a thread which joins inspiration, process and the final result, weaving every aspect of the process into the fabric. The thread follows Matzkhun’s curiosity, like a line that connects thought into a network of reflections.

Emerging Drawing
Miriam de Langley’s workflow is design-driven, allowing her to use drawing as a passage from inspiration to a final product. In order to develop design for wearable jewellery, Miriam translates the inspiration into a sketch, the sketch into a form, and finally the form into function. Her creative process is assisted by digitalization, which turns the imperfections of a hand-made drawing into the numerical perfection of manipulative data. This methodology allows delicate alterations during the process, which act as a “snowflake effect,” producing infinite outcomes and variations of her precious products. Miriam’s strategy integrates drawing into a process of manufacturing, as a connection between technology, nature, idea and purpose, in attempt to discover and produce perfect harmony.

Contemplative Drawing
Yalda Bozorg uses drawing as a mirror, reflecting and retracing every step of her creative process. Drawings often begin as a map, pointing in which direction to proceed and where not to go. In addition to following a line on paper, Yalda’s studies turn themselves into tangible substances, allowing hands to sculpt her thoughts. In this way, matter absorbs drawing and inspires next steps in the process. Yalda’s creativity travels at the speed of thought, illuminating and generating new ideas by oscillating between matter and imagination. Hands follow mind and mind follows matter, reversing the creative process and creating a loop of conscience. The artwork becomes a reflection of the creative mind, blurring the boundaries of representation.

Drawing is often misinterpreted as a background activity and sometimes completely obscured from view. This exhibition enabled Jenny’s personal relationship to drawing to find its way through. “The Drawn and Crafted Object” is asking us to pause and pay closer attention to ingredients, making us aware of every dot and line that contribute in converting mind into matter.m

“Drawing is often misinterpreted as a background activity and sometimes completely obscured from view.”