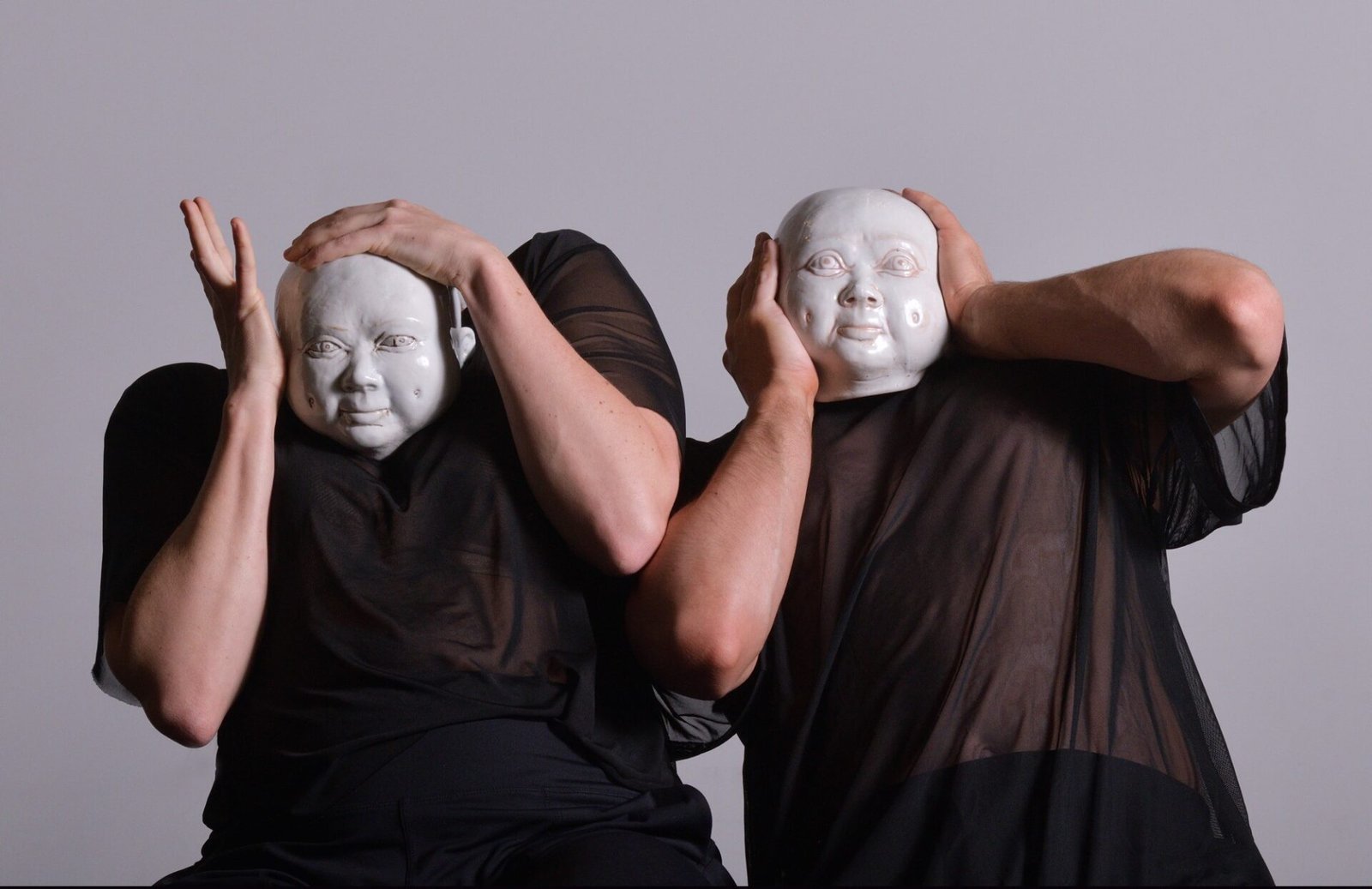 The project, set to be shared with the public in the spring of 2022, will culminate in a multi-faceted participatory performance and exhibition. The aim of this project is to explore connections between and interpretations of craft materiality through the communicative and ephemeral language of dance. Findings of material explorations will be shared with the public through an interactive performance in an attempt to forge nuanced understandings of craft media including glass, metal, wood, fibre and ceramics. The collaborative, cumulative and responsive project recognizes the development of refined material understandings as a transformative method of building stronger relations with the natural material world.

Through conversation, studio visits and hands on material interaction, craft artists will share with Laughlin their artistic process and refined material understandings from which the choreographer will develop a movement vocabulary that will constitute the final choreographed dance pieces.  In their respective media, craft artists will produce new works in response to this developed movement vocabulary.  Material responses will be incorporated into the final performance and exhibition. During which  audiences will be given the opportunity to engage with newly produced works in a tactile and transformative exploration of materials founded in the natural world that are instrumental to historical and contemporary craft. This conversation between disciplines will be documented from its earliest stages onward; documentation will be included in the performance and exhibition.

From an early age, Patrick was encouraged by his parents to solve problems through making and repurposing as opposed to simply buying something new. He grew up in an environment where creating a sustainable life meant being a good host, being generous, and building relationships within the community. His current work is divided between developing exhibition and production spaces (Space), his professional design practice based around wood and regional materials (Daly Co.) and explorations with his art practices of sculpture and music.

As a creator living and working in Vancouver on unceeded territory, regionalism, hyper-localism and decolonization are fundamental to his work, both in an art and design context. His primary working medium is wood, and specifically wood found in British Columbia, from ethical and alternative sources and through reclaiming. With this material, he seeks to create value locally for our communities through the design of physical objects, environments and human experiences. Wood is not only a medium to create with, but it is an agent of storytelling and our biggest ally in the climate crisis. The work Patrick brings into physical form seeks to excite curiosity in wood through texture and form with simple shapes and color.

Observing a need in Vancouver to develop accessible production spaces that both advance craft and increase connections within our creative communities, he started something of his own. The spaces Patrick has invested in have supported upwards of 300 creators in this city and resulted in hundreds of new connections and collisions. This collaborative space feeds his creative process and helps him broaden his perspective through practicing around others. It is a space where he can play the parts of an artist, a designer and a craftsman – Working towards a collective whole.

Drawing from her experiences in art, craft, and trade, Stefanie Dueck employs traditional metalworking techniques in unconventional ways. Both functional and sculptural works are driven by process and an experimental spirit. Her explorations with metal have taken her from the Kootenay School of the Arts in Nelson, BC, to an apprenticeship in Southern Spain, a scholarship at the Center for Metal Arts in Pennsylvania, and over a decade of independent practice in Vancouver, BC. Having recently relocated to the Sunshine Coast, Stefanie continues to create, focusing on her line of hand forged flatware, sculpture, and commissioned projects.

For the Dance:Craft collaboration with Joe Ink, Stefanie will be examining how the industrial themes and structural elements of her art relate to the human form. She is excited to be incorporating interactive components, and looks forward to watching the work evolve once it leaves her metal shop and enters the dance studio.

Deborah Dumka, born in 1954, has lived for the most part in her birth province of BC, occasionally in other parts of Canada and mostly on the shores of an ocean. Her post secondary education and short career in electrical engineering bestowed on her a problem solving lens that carries into her interactive textile based craft practice. The physical and emotional landscapes of rural settings are the backdrop to her explorations, integrating colour, texture and sound, producing small installations based on hand made felt floor carpets.

Within her work, Dumka explores themes of belonging, place and our connection with nature. She uses wool, silk, dyes and carding tools to blend raw materials into thin layers that are assembled through felting into low relief tactile elements. Using electronics, she integrates landscape sounds, expanding the sensory snapshot, connecting into our private experiences through a constructed moment.

In 2011, thinking through the struggle to express with words the emotions driving her works, she wondered about the efficacy of spoken language versus the expressive vocabulary of a different art form. She invited contemporary dancer Sylvie Mazerolle to her studio to reflect on and respond to the series Water on Stone. The dance, performed on the pebble beach inspiring the series, was filmed and projected onto the work White Noise. Muscle memory developed through rhythm, water, motion and repetition emerged as the thread common to the intent of the work, the fabrication process and the beautiful movement of the dance.

The Dance:Craft Project brings an opportunity to continue the conversation.

Hope Forstenzer lived most of her life in and around New York City, Seattle and now happily lives in Vancouver, Canada. Starting as a photographer and filmmaker, she moved into interdisciplinary theatre for a short stint before falling irrevocably in love with glass.

She is always looking to build on the rich history of glassmaking, experimenting with it to see where it interconnects with where the world is now. She uses blown glass paired with stained glass techniques to bring the modern human experience into a space historically reserved for religious icons, and uses shapes in sculpture that we see daily (balloons, pillows, bodies) to bring a new perspective on our own emotional states. She is always striving to express the two things she loves most about glass – light and emotion.

She is also inspired by Terminal City Glass Co-op, which she belongs to. The co-op is a community of artists who help each other achieve their vision, and influence one another’s work with ideas and input.

Coming from a history of mixing disciplines in live performance, collaborating with Joe on dance:craft has been a joy for her. The meetings to come up with ideas for possible uses of glass in the performance yielded wild new ideas that will elevate her practice while hopefully, adding to what the dance itself will be. She trusts that the process will yield a wild and wide variety of colour and light that will shine onstage alongside the dancers.

Debra is a British Columbian ceramic artist who chose to begin her career through a six-year self-directed apprenticeship starting in 1973, attaining her BFA 30 years later. She is a parent, teacher,  exhibitor, speaker, historian, writer, traveller, adjudicator, and collector, but her main role is that of a studio artist.  She has received a number of awards and grants, most recently a Canada Council for the Arts –  Arts Abroad Project grant, supporting her residency in Japan. Her writing and images have been published in international magazines, and her work has been exhibited nationally and internationally, and is held in many public collections, as well as in private collections world-wide.

Debra’s practice revolves around her interest in the human condition –  which she regards as a fundamental  and timeless platform for commentary – and where the figure is an opportunistic and fulsome enactor.

In our modern world, notions of the divine have migrated into post-modern skepticism. However, we do share uncertainty around our world state, and any way forward.  The humanistic nature of clay provides the perfect vehicle to address journeys undertaken and unknown outcomes.

Craft objects are usually realized as fixed forms – ideas made visible, topical and long-lasting. This Dance:Craft project has been about unfastening notions around static objects and intentional spatial interaction through dance.  It is a collaboration of the fixed with the dynamic.

Debra’s pieces will be much larger than usual, made in interchangeable parts, open to being removed from their quiescent state, and through the dancers’ interaction, become kinetic.

Joe Laughlin is the founding Artistic Director of Joe Ink. He has created 13 productions for the company, most recently 4OUR, Retrospective: 25 Years, dusk and GRACE, and his over 60 works have been performed in Canada, the US, UK, Europe, South Africa and South Korea. Joe has received the Canada Council Jacqueline Lemieux Prize, the Clifford E. Lee Choreography Award and the BC Isadora Award for Choreography. A particularly versatile artist Joe has worked in dance, theatre and television, receiving commissions from arts organizations including the Canada Dance Festival, the National Arts Centre, the Banff Centre, Canada’s Royal Winnipeg Ballet, Ballet BC and the Johannesburg based Moving into Dance Mophatong, among others. Well known for his personable teaching style, Joe’s ability to inspire dancers and non-dancers alike to discover their individual movement potential is one of his unique talents and led him to create Move It!